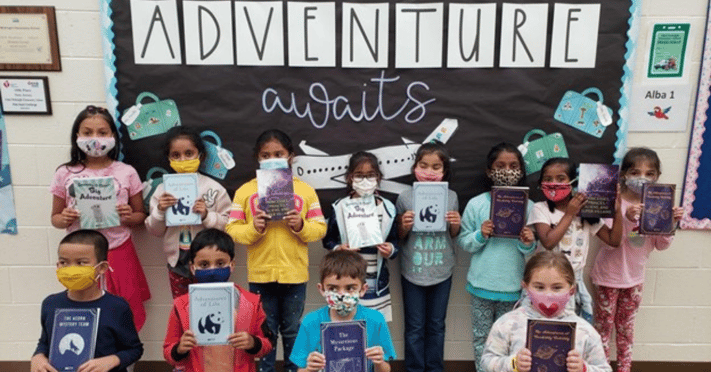 In 2021, the East Windsor Regional School District in Hightstown, New Jersey, teamed up with Written Out Loud to launch a new summer program. After an unprecedented school year where students experienced the multi-layered impact of social distancing, virtual learning and quarantines, this New Jersey public school district saw an opportunity to engage their students in a creative outlet that would not only build their writing skills but feed their collaborative spirit.

Envisioned by Joshua Shelov, a Hollywood professional, and pioneered at Yale University, Written Out Loud combines group brainstorming sessions with individual writing missions to boost students’ storytelling skills. The program groups like-minded students into teams, using their favorite books, shows and videos as curriculum to inspire their creative juices. As a result, students finish the program as newly published co-authors of their own books.

To launch the program at East Windsor in May of 2021, rising second through ninth grade students attended kickoff assemblies that sparked their interest. Students learned how Written Out Loud could transform the writing process into an adventure. After the isolation brought on by the pandemic, this summer camp presented a much-needed opportunity for students to make personal connections, have fun and unleash their imagination.

After this event, East Windsor had more than 350 students enroll in their summer program. When the camp session began in June, students were ready. Attendance on the first day confirmed this when 80% of the enrolled students checked in, compared to 60% in previous years. Not only did they show up, but all of these students became regular attendees in the program. The program was off to a good start.

Discovering the Power of Storytelling through Teamwork

To engage students from East Windsor in the program, camp mentors, known as Story Directors, prompted them to talk about stories they already knew and loved. The format of the stories didn’t matter. Whether it was Harry Potter, Hamilton, Marvel, video games or anime, these leaders focused on finding the place where students felt the most comfortable.

Organized into small teams of four to eight, the students began by examining their favorite stories, gaining insight and inspiration as they brainstormed ideas for an original piece. As part of the Written Out Loud process, these students, referred to as storytellers in the program, learned how specific tools and techniques make stories great. Then, they put this knowledge to work on story missions, collaborating with their teammates to develop and write their own narratives.

Being part of a team benefitted students by alleviating the pressure of the blank page and providing a creative support system for their writing journey. At the East Windsor camp, the changes in students were measurable, with 90% of those who regularly attended the program significantly increasing the quantity of their writing by 50% or more. As these students wrote more, their confidence in their writing grew and so did their determination. That’s one of the goals of the Written Out Loud program—to promote high expectations and commitment, as students advance toward becoming a co-author of a published book.

While the Written Out Loud program clearly elevated students’ writing capabilities, it also offered an opportunity for students to socially connect with teammates. The program focuses on promoting a fun atmosphere where writing becomes a journey of kindred spirits.

When the East Windsor program launched in the summer of 2021, many students had just emerged from the isolation of the pandemic and were reacclimating to their peer environment. After virtual learning and physical distancing, students needed an interactive space to nurture their social and emotional growth. Written Out Loud offered just that. Students built bonds, developed friendships and grew more confident.

While some students entered the program feeling hesitant or scared, over time these students showed tremendous growth, flourishing with their creative cohorts. As one Story Director recalled, “Ryan was, at first, my most reluctant participant. However, as he got more comfortable with the group, and we incorporated more Minecraft into the story (which he's completely obsessed with), he started to open up a lot.” As the camp progressed, this student blossomed, connecting with several group members, inviting them on Zoom, and eventually writing the longest chapter in their book.

For East Windsor, this scenario was not an isolated case. The social-emotional learning resulted in participants gaining courage, trust and better communication skills, which translated into stronger peer relationships. The Written Out Loud program engages in developing critical social and emotional skills, aligned with the Collaborative for Academic and Social Emotional Learning (CASEL) standards. What does this mean? Students became more assured and team-oriented academic achievers.

While the summer camp provided the opportunity for more than 350 East Windsor students to say they published their first book, it was clearly just the first chapter in their writing life. In this New Jersey school system, a new tradition of joyful writing was born, with 250 of the 350 participating students named Written Out Loud (WOL) Stars. As the fall semester resumed, these star students have started working on new chapters of their second book, as their stories continue to grow.

Learn more about Written Out Loud and start transforming your creative students into joyful writers.